By Chauncey Alcorn | CNN Business Leaders from some of the nation’s top historically Black colleges and universities are...
Read more

“I Am No Longer Young” | JayneStars.com

Although 40-year-old Cecilia Cheung (張栢芝) is already a mother of three children, she has maintained her beautiful...
Read more

Nothing was stopping Jordyn Woods from maintaining her workout regiment! As we continue to workout at home amid...
Read more 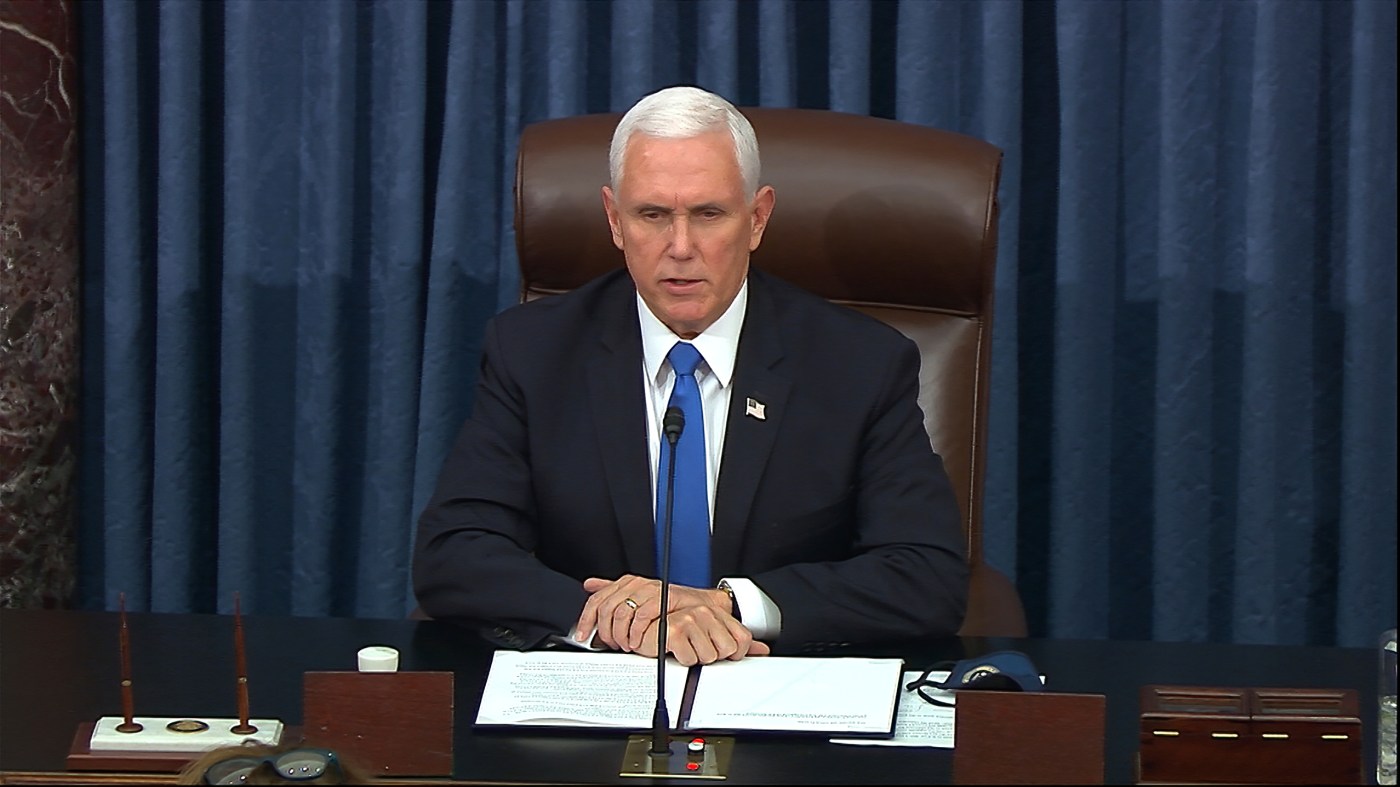 Joe Biden was formally recognized by Congress as the next U.S. president early Thursday, ending two months of failed challenges by his predecessor, Donald Trump, that exploded into violence at the U.S. Capitol as lawmakers met to ratify the election result.

The Democratic president-elect’s victory was sealed after House and Senate members fended off a final round of objections to the Nov. 3 election outcome raised by a handful of Republicans on Trump’s behalf. The proceedings were disrupted for several hours as pro-Trump demonstrators overran police lines, besieged the House chamber and entered the Senate chamber, sending lawmakers fleeing for safety.

Vice President Mike Pence — who had split with Trump by calling for protesters inside the Capitol to be prosecuted — presided over certification of Biden’s 306 Electoral College votes. Earlier Wednesday, he defied the president by telling lawmakers in a letter he would make no attempt to unilaterally block the certification from proceeding.

Trump said early Thursday there “will be an orderly transition on January 20th” after Congress concluded the electoral vote count certifying President-elect Joe Biden’s victory and after a day of violence when his supporters stormed the U.S. Capitol.

Trump said in a statement tweeted by his social media director Dan Scavino, “Even though I totally disagree with the outcome of the election, and the facts bear me out, nevertheless there will be an orderly transition on January 20th.”

…fight to ensure that only legal votes were counted. While this represents the end of the greatest first term in presidential history, it’s only the beginning of our fight to Make America Great Again!”

He adds: “I have always said we would continue our fight to ensure that only legal votes were counted. While this represents the end of the greatest first term in presidential history, it’s only the beginning of our fight to Make America Great Again.”

The congressional action, usually a pro forma affair that draws little notice, will be remembered as the coda for one of the most tumultuous presidential campaigns in recent history. It was the final, official step in the drawn-out 2020 election — which is why it drew the attention of the president and thousands of his supporters he implored to come to Washington in protest.

Senate Democratic leader Chuck Schumer placed the blame for the violence squarely on Trump, but said that Congress wasn’t deterred.

“These images were projected to the world,” Schumer says. “This will be a stain on our country not so easily washed away.”

He added, “In the end all this mob has really accomplished is to delay our work by a few hours.”

The occupation of the Capitol prompted Republicans to curtail their planned objections, with senators forcing debate on only two states’ electors instead of the six they originally planned.

“The United States Senate will not be intimidated,” Senate Majority Leader Mitch McConnell said. “We will certify the winner of the 2020 election.”

One unidentified woman died after being shot by Capitol Police when protesters stormed the Capitol shortly after Congress began the certification process, according to the Washington, D.C. police department. At least 52 people were arrested and a number of guns were seized.

“I am genuinely shocked and saddened that our nation, so long the beacon of light and hope for democracy, has come to such a dark moment,” Biden said in brief remarks on the incident in Wilmington, Delaware on Wednesday.

“Today is a reminder — a painful one — that democracy is fragile, and to preserve it requires people of good will, leaders with the courage to stand up who are devoted not to the pursuit of the power or their personal interests, pursuits of their own selfish interests, at any cost, but of the common good,” he added.

Trump has no further means to challenge the election outcome, barring an unlikely decision by the Supreme Court to consider his unsubstantiated claims of widespread fraud before Biden is inaugurated.

Biden inherits a raging pandemic that Trump has all but ignored over the last two months as he waged a legal and political campaign to overturn the election results. The new president’s first test will be to more effectively distribute and deliver coronavirus vaccines, after the Trump administration fell far short of meeting a year-end goal to inoculate 20 million Americans.

The certification came on the same day that Biden learned he will have a Senate Democratic majority after twin runoffs in Georgia. The new president has promised to put forward another economic stimulus bill soon after taking office that would include billions of dollars in spending for vaccine distribution and to safely reopen schools, with the goal of allowing most to begin in-person instruction within the first 100 days of his presidency. His team is building a full federal response to the pandemic that includes vaccine distribution, personal protective equipment and economic aid.

Born in Scranton, Pennsylvania and raised in Delaware, Biden spent decades pursuing the presidency. He ran for the White House in 1988 and 2008 and considered running in 1984 and 2016.

Elected to the Senate in 1972 at the age of 29, Biden served 36 years in the chamber. He chaired the Judiciary and Foreign Relations committees before becoming Barack Obama’s vice president in 2009. He accepted the offer to be Obama’s running mate on the condition that he would be the last person in the room when Obama made key decisions, though he wasn’t always heeded.

He entered the race in April 2019 driven, he said, by a sense of obligation to oust Trump. Biden cited the violent Charlottesville, Virginia, demonstrations by White supremacists in 2017 in which a peaceful counterprotester was killed. Trump said after the incident that “there were very fine people on both sides.”

Throughout his candidacy, Biden endured criticism that he was too moderate or too old while focusing his appeals on a reliable base of support — African Americans, women, and a sliver of White voters who had voted for Trump in 2016 but had soured on the president.

His general-election argument against Trump centered on the president’s handling of the pandemic that had killed nearly a quarter of a million people by Election Day and put millions more out of work. He survived Trump’s efforts to attack him as corrupt and senile, returning the Rust Belt states of Wisconsin, Michigan and Pennsylvania to the Democratic column and adding Arizona and Georgia, two states that hadn’t supported Democratic presidential candidates in this century.

In all, Biden notched the same Electoral College vote total that Trump had secured four years earlier, 306 to 232.

By Chauncey Alcorn | CNN Business Leaders from some of the nation’s top historically Black colleges and universities are...
Read more
EntertainShowbiz

“I Am No Longer Young” | JayneStars.com

Although 40-year-old Cecilia Cheung (張栢芝) is already a mother of three children, she has maintained her beautiful appearance and still receives a...
Read more
EntertainShowbiz

Nothing was stopping Jordyn Woods from maintaining her workout regiment! As we continue to workout at home amid the pandemic, let the stars...
Read more
Headlines Daily

Neon swimsuits have been setting the Internet on fire over the past year, with Heidi Montag and more stars rocking the look. Take...
Read more
- Advertisement -

By Chauncey Alcorn | CNN Business Leaders from some of the nation’s top historically Black colleges and universities are meeting virtually with Google CEO...
Read more

Four years ago this week, Rick Reiss, while visiting his wife’s family in the Philippines, got up at 3 a.m. to watch President...
Read more

By Kate Bennett | CNN On the morning of Jan. 20, Donald Trump and Melania Trump will depart the White House as President and...
Read more
- Advertisement -